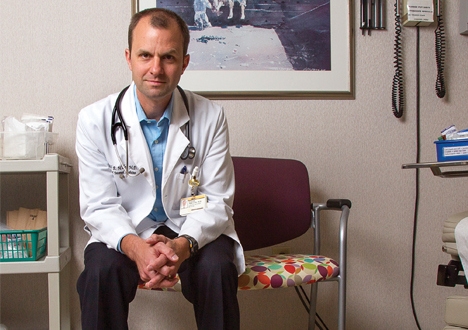 “Step one is that you have to at least acknowledge that this anti-obesity bias exists and that it influences your decisions,” says internist David P. Miller, MD, in an outpatient clinic of Wake Forest Baptist Medical Center in Winston-Salem, N.C. Photo by Bob Leverone / AP Images for American Medical News

■ Medical educators are starting to raise awareness about how weight-related stigma can impair patient-physician communication and the treatment of obesity.

This summer, a patient in the Washington, D.C., area visited her orthopedist with a new complaint about pain in her right hip and groin that was not responding to nonsteroidal anti-inflammatory drugs.

The pain was keeping the woman — who has a body mass index of 50 — from exercising as much as she wanted to continue with a weight-loss program that had helped her shed 70 pounds and counting during the previous year.

When the patient started to describe her symptoms, the orthopedist cut her off, telling her that he could not address her problem.

“You need to lose weight,” he told her. When the patient said she had already had success in dropping pounds and was continuing to work at it, the doctor did not offer an encouraging word. He responded: “Well, you need to lose more weight.”

The orthopedist did not assess the hip or do a physical exam, touching the patient only when he shook her hand on his way out the door. The conversation left the patient in tears in the exam room.

“All he saw was my weight,” said the woman, who also is a patient of Scott Kahan, MD, MPH. He is an obesity specialist who directs the National Center for Weight and Wellness, a four-physician, multidisciplinary clinic, also in Washington.

“I hear things like this all the time from my patients,” Dr. Kahan says. He adds that physicians should not ignore obesity, but ought to be able to see beyond weight to consider all the factors that may contribute to their patients' medical problems.

Dr. Kahan, who teaches a course that addresses weight stigma at the George Washington University School of Medicine and Health Sciences in Washington, D.C., is one of a cadre of medical educators who argues that a key to improving treatment of obesity is to tackle the medical system's all-too-frequent mistreatment of overweight patients.

A battle against perceptions

Obese patients' struggle to shed excess weight is beset by a society that simultaneously prizes slim supermodels and makes it all too easy to lead a sedentary lifestyle filled with fast, cheap, high-calorie meals. More than a third of U.S. adults are classified as obese, and Harvard University researchers project that the obesity rate will climb past 40% by 2050.

Meanwhile, a growing body of research shows that obese patients seeking support and encouragement in doctor's offices instead find themselves stigmatized and fighting a battle against physician bias based on their weight.

Because few physicians, medical students or others will admit openly to bias, researchers have developed a tool to plumb their unconscious attitudes. The Weight Implicit Association Test asks participants to pair images of “thin” or “fat” people with negative or positive words. The faster the test-taker links the type of person to a negative attribute, the stronger the unconscious negative attitude. The validated survey tool has been used to measure implicit biases related to race, age, gender, sexuality and other areas.

DID YOU KNOW:
More than a third of U.S. adults are classified as obese.

The vast majority of the people who take the Web-based test exhibit a strong preference for thin people and associate the fat people with negative words, and nearly 2,300 physicians scored about the same as the general populace, said a study published Nov. 7, 2012, in PLoS One. A survey of 620 U.S. doctors found that more than half viewed obese patients as “awkward, unattractive, ugly and noncompliant with therapy,” said a study published October 2003 in Obesity Research.

Findings on physician communication with obese patients also are discouraging. A study published March 20 in the journal Obesity analyzed audio recordings of office visits between nearly 39 primary care doctors and 208 patients. The doctors were 35% less likely to demonstrate emotional rapport with overweight and obese patients than with their normal-weight patients. For example, the physicians did not make as many expressions of empathy, concern, reassurance or partnership or engage in nonmedical social talk such as asking about the football game.

Another Obesity study, published in July, examined 21,000 health plan members in one state. The overweight patients were 23% likelier to have had visits with five or more primary care doctors within a two-year period. Obese patients, meanwhile, had a 52% greater chance of having seen that many doctors compared with normal-weight patients.

Such research does not prove that obese patients are getting worse care because of physician bias, but it does suggest that many of these patients are experiencing unsatisfactory relationships with their doctors, says the lead author of the Obesity studies, Kimberly A. Gudzune, MD, MPH. She is assistant professor of medicine at the Johns Hopkins University School of Medicine in Baltimore and treats patients at the school's Digestive Weight Loss Center in Lutherville, Md.

“The overt negative attitudes were not as predominant,” she says. “But that lack of emotional connection — that's where I think this implicit bias is coming in.”

Tomorrow's physicians are not immune to the societal preference for thin people. Nearly 40% of 310 third-year medical students have unconscious bias against overweight people, said a study published in July's Academic Medicine. Of the students with anti-fat bias, two-thirds wrongly thought they had a neutral view of people based on weight.

Medical educators first must raise awareness among physicians-in-training about what their own implicit attitudes about obesity are, says David P. Miller, MD, associate professor of internal medicine and public health sciences at Wake Forest University School of Medicine in Winston-Salem, N.C.

“This unconscious bias is your gut reaction to somebody, our first impression when someone walks into the room before we've consciously thought about it. It's unconscious bias that mostly predicts prejudice or negative behaviors toward others,” Dr. Miller says. “So, step one is that you have to at least acknowledge that this anti-obesity bias exists and that it influences your decisions.”

Wake Forest has had a mandatory obesity education course for several years, part of a growing trend of giving more curricular attention to weight loss and nutrition science that experts say is long overdue in medical school. The school's explicit focus on battling bias against obese patients is less common.

Along with taking the Weight Implicit Association Test, students watch a 30-minute documentary that features ambulatory obese patients discussing the challenges they face in daily living, in interacting with the health system and with fluctuating weight over time. The documentary is intended to create empathy toward obese patients among students, though its effectiveness is still being studied.

At Baylor College of Medicine in Houston, medical students get instruction on weight bias along with exposure to the concepts of bias against patients based on race, age, gender and other factors through the four-year curriculum. There is a greater focus on the clinical years when medical students are participating in patient care.

A November 2011 Assn. of American Medical Colleges report said that complicated problems such as obesity, violence and addiction require the integration of behavioral and social-science approaches within medical education.

Thousands of health professionals, most of them physicians, have taken a free online continuing medical education course offered by the Yale University Rudd Center for Food Policy and Obesity. This growing focus on bias against obese patients comes as the American Medical Association in June classified obesity as a disease at its Annual Meeting of the House of Delegates.

“Recognizing obesity as a disease will help change the way the medical community tackles this complex issue,” AMA Board of Trustees member Patrice Harris, MD, said at the time.

As vexing as the country's obesity challenge is, what individual patients are seeking from their physicians — and what they deserve — is the same treatment given to other patients, experts say. In the video that Wake Forest medical students see, a 40-year-old obese woman named Dee Dee explains how poor communication with overweight patients can backfire.

“We've struggled with our weight, and always have,” she says. “And looking down upon us as if we're less-than, or lower-class citizens, because we're overweight only discourages us more and only makes us want to hide away in our homes and not do anything about our health.”

Experts say there are several steps physicians and other health professionals can take to create a more supportive and welcoming environment for obese patients.

“Implicit and Explicit Anti-Fat Bias among a Large Sample of Medical Doctors by BMI, Race/Ethnicity and Gender,” PLoS One, Nov. 7, 2012 (link)