■ One resolution adopted by the House of Delegates calls the Medicare enrollment system a "looming disaster for patients and physicians." 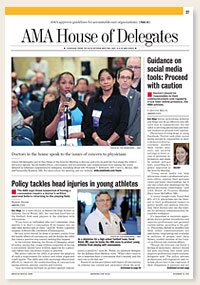 San Diego -- The process for physicians to register with Medicare -- the Provider, Enrollment, Chain and Ownership System, or PECOS -- needs to be improved, according to policy adopted at the AMA Interim Meeting.

The AMA House of Delegates adopted policy on this issue because the Centers for Medicare & Medicaid Services system is a "looming disaster for patients and physicians," according to one resolution.

The registration deadline was July 6, although this has changed several times. Claims are not being denied while CMS reviews the program.

Awareness of the need to enroll in PECOS is low, delegates said. Claims are being honored if a physician is not registered, but CMS has not announced when that will change.

"There is general lack of knowledge about this," said Michael Lew, MD, an alternate delegate from the Massachusetts Medical Society and an infectious disease specialist in Newton.

The system has long come under fire from the AMA and other medical societies. It was launched in November 2003 to better centralize the enrollment process. Before this time, each contractor had its own system.

After complaints from the AMA and others, CMS said June 30 that it would launch a review of PECOS, and that contractors would not start automatically rejecting claims involving physicians not properly enrolled as of a July 6 deadline. The AMA has advocated that CMS not reject any claims before Jan. 3, 2011.

Issue: The National Health Services Corps scholarship program encourages primary care physicians to practice in underserved areas, but the program is still underutilized. The Patient Protection and Affordable Care Act will expand it by $1.5 billion during the next five years.

Proposed action: Work to increase physician, medical school and medical student representation in the decision-making process of the program to help make it more popular and more efficient. [Adopted]

Issue: Debt incurred by patients for health care is far less predictable and more complex than most consumer debt, but it can impact financial health significantly. In addition, consumers looking to improve credit scores would be more likely to pay off medical debt first if these amounts were cleared from their records within 30 days rather than the usual seven years.

Proposed action: Support the principles that are stated in the Medical Debt Relief Act, which passed the House on Sept. 29 and has been referred to the Senate. [Adopted]

Issue: The Patient Protection and Affordable Care Act requires companies offering group and individual health insurance with dependent coverage to continue offering this until the child is 26. The law does not apply to those covered by Tricare.

Issue: The Patient Protection and Affordable Care Act is a flawed piece of legislation that did not sufficiently address medical liability reform, the sustainable growth rate and problems with antitrust rules.

Proposed action: Identify flaws in PPACA and advocate that they be fixed. [Adopted]

Issue: Hospitals declaring bankruptcy that do not pay for "tail coverage" leave physicians personally liable for any claims made after the institution closes.

Proposed action: Seek federal legislation amending the bankruptcy code such that medical liability premiums paid for physician employees will be considered a priority claim and paid immediately out of the proceeds of a bankrupt hospital's estate. [Adopted]