"Sesame Street" has Muppet doctor in the neighborhood

■ A New York cardiologist is the inspiration for a puppet that educates children in Spain about leading healthier lives and reducing heart disease risk.

Although separated by more than 3,000 miles, Valentin Fuster, MD, PhD, and Dr. Valentin Ruster share some uncanny similarities beyond their nearly identical names.

Both are considered world-renowned cardiologists, and they are passionate about educating children on heart health. They both have gray hair that they wear combed back behind their ears. And they are originally from Spain.

Dr. Ruster, you see, is a Muppet on the children’s TV show in Spain.

His character is based on Dr. Fuster, a New York cardiologist who serves as an international adviser on Sesame Workshop’s Global Health Initiative. Sesame Workshop is the nonprofit educational organization of “Sesame Street.”

“I am you,” the Muppet told Dr. Fuster when they first met in May at a film production center in Queens, N.Y.

Dr. Fuster was not involved in the decision to create a character in his likeness. But he hopes that the Muppet, who wears a white coat and stethoscope, will help teach children in Spain about wellness and lead them to make healthy choices to prevent developing cardiovascular disease later in life.

“The epidemic of cardiovascular disease relates to behavior such as eating properly and a lack of exercise, so what better ages than 3 to 6 to infuse the concept that health is a priority?” said Dr. Fuster, director of Mount Sinai Heart at the Mount Sinai Medical Center in New York.

Cardiovascular disease, specifically ischemic heart disease, kills about 7.3 million people across the globe each year, making it the world’s leading cause of death, according to 2011 data from the World Health Organization. In Spain, 32.2% of deaths that occurred in 2007 (124,126) were due to cardiovascular disease, said a 2009 report by the Ministry of Health and Social Policy in Spain.

Contributing to the global problem is a high prevalence of overweight and obesity and too little physical activity among children and adults, health professionals say. Another key factor in Spain is smoking, said Jorge Baxter, director of Global Education at Sesame Workshop. In 2002-05, 28.1% of adults 16 and older in Spain smoked every day, according to a 2007 WHO report.

Dr. Fuster and Sesame Workshop teamed up to tackle the problem in Spain, where “Sesame Street” has been airing for more than 35 years. The collaboration was formed, in part, because Dr. Fuster had worked with Sesame Workshop on a childhood health education program in Colombia. He also is interested in addressing health problems in Spain because he spent much of his life there.

“Sesame Street” developed the Muppet doctor to communicate important health messages in a way that is easy for children and their parents to understand, Baxter said. Dr. Ruster is the only physician in the Muppet cast.

“He speaks in a way that’s very accessible to our audience,” Baxter said.

When describing himself, Dr. Ruster says he has dedicated himself “to that miraculous, beautiful organ & the heart!” He adds, “My heart jumps at the chance to spend time with my furry friends in Barrio Sésamo. We love to exercise and eat scrumptious fruits and veggies together.”

Much of Dr. Ruster’s dialogue during the 26 episodes of “Barrio Sésamo: Monstruos Supersanos” comes from information Dr. Fuster has written on promoting heart health among children.

The show began airing in Spain in July. Although it isn’t available in the U.S., Sesame Workshop is discussing developing a project with Dr. Fuster to address childhood obesity in Harlem and the Bronx in New York. That program probably would include books featuring Dr. Ruster, Baxter said.

“I would like to be recognized as a scientist and a doctor,” Dr. Fuster said. “Now everyone talks about my Muppet. But if this can really have an impact on health, you take any road you can.” 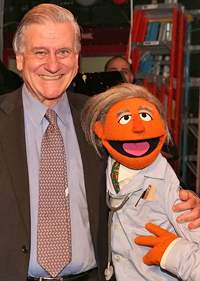 A cardiologist is the newest Muppet on the Spanish version of “Sesame Street.” He shares some basic information about himself and his passion for heart health.

Activities: Hosting health-themed game shows and teaching my furry friends about the heart and body.

Pet peeves: When Cookie Monster tries to eat my tie or stethoscope.

About me: I’m a world-renowned doctor who has dedicated himself to that miraculous, beautiful organ — the heart! My heart jumps at the chance to spend time with my furry friends in Barrio Sésamo. We love to exercise and eat scrumptious fruits and veggies together. But most of all, I just love to talk to my friends, helping them get to the heart of any matter! My heart beats with excitement to know that we all have a happy, healthy heart. My feathered hair is a surefire way to tell how excited I am.