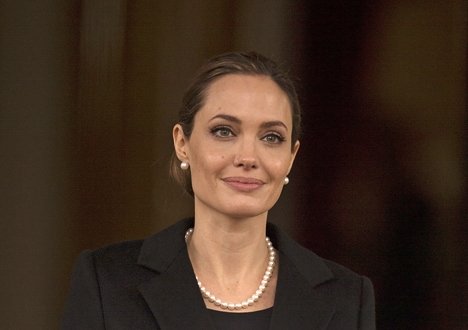 Angelina Jolie wrote in her New York Times opinion piece that she hoped other women would “benefit from my experience.” Photo by Alastair Grant / AP / Wide World Photos

■ The actress's story is connecting with women concerned about breast cancer risks. Primary care doctors must be ready for their questions.

On the day that Angelina Jolie's op-ed discussing her hereditary risk for breast cancer and decision to opt for a prophylactic bilateral mastectomy ran in The New York Times, genetic counselor Lisa Madlensky, PhD, checked in with her scheduler to see if the news had prompted patient inquiries.

“She actually didn't have time to speak to me because she had all these calls backed up on the line,” said Madlensky, director of the Family Cancer Genetics Program at the University of California, San Diego Moores Cancer Center. “Finally, she put someone on hold. She hadn't seen the news yet and she said, 'What's going on?' ”

In the wake of the actress's announcement, genetic counselors and breast and cancer centers are reporting similar increases in calls and visits from patients who want to learn more about being tested for the BRCA1 and BRCA2 gene mutations. The Jolie case shows the power that celebrities wield in driving medical care patterns by raising public awareness and tapping into the emotional connection that patients often form with the women and men who grace the covers of supermarket tabloids.

“Most breast centers around the country are undoubtedly now experiencing an influx of inquiries,” said David P. Winchester, MD, medical director of cancer programs at the American College of Surgeons and a breast surgeon in Chicago.

Primary care physicians should expect to answer more questions from their patients about genetic testing now that it is being spotlighted more brightly than in recent memory. They also should understand how to conduct a thorough assessment of patients' family histories to determine whether they would benefit from a referral to a genetic counselor and genetic testing, said experts in cancer genetics and breast and gynecologic oncology.

Amid the widespread plaudits Jolie's op-ed earned, some medical experts are voicing concern that the Oscar-winning actress's story could lead to inappropriate use of genetic testing and prompt women without hereditary cancer risks to demand prophylactic contralateral mastectomy when less invasive treatment options are as available.

A sensitive response to requests

Although the BRCA gene mutations account for as many as 10% of breast cancers and 14% of ovarian cancers, research shows that only up to one quarter of 1% of women carry either of them. So, experts said, it is likely that the vast majority of women prompted by the Jolie case to ask about breast-cancer genetic testing will be unsuitable for it.

Physicians must tread a careful line in handling potentially inappropriate requests from patients who may draw the wrong lessons from celebrity medical cases, said Barron H. Lerner, MD, PhD, a medical historian who wrote The Breast Cancer Wars in 2001 and When Illness Goes Public in 2006. He also is professor of medicine and population health at New York University's School of Medicine.

“To me, it's very reasonable as a physician to say, 'Hey, this Angelina Jolie story is very moving and very emotional and very powerful, but your case and hers have a lot of differences and here's why I think that,' ” Dr. Lerner said. “I wouldn't belittle at all the interest of a patient in testing based on her story, but I'd be willing to acknowledge the emotional aspect. … People are so moved by these celebrity illness stories.”

More than 90% of women with family histories not linked to increased risk of the genetic mutations will not benefit from genetic counseling or testing, according to the U.S. Preventive Services Task Force. Although the testing is not physically burdensome, for average-risk women, it often yields ambiguous results that can heighten their anxiety.

“At this point, scientific evidence only shows that BRCA1 and BRCA2 testing is beneficial for women who have reviewed their family history of breast or ovarian cancer with a primary care professional and discussed the pros and cons of the screening test with a trained genetic counselor,” task force chair Virginia Moyer, MD, MPH, said in April before the Jolie news broke.

DID YOU KNOW:
BRCA gene mutations account for between 5% and 10% of breast cancers and 14% of ovarian cancers.

Primary care doctors have a spotty record in determining who would benefit from referral to genetic counseling or testing for BRCA gene mutations, said a study in the Dec. 1, 2011, issue of the journal Cancer. Researchers used vignettes to survey 3,200 family physicians. The respondents wrongly referred average-risk women to counseling 29% of the time and correctly referred high-risk women only 41% of the time.

The Jolie case is sure to heighten the challenge for time-squeezed primary care physicians trying to counsel patients properly on this issue, said Barbara A. Goff, MD, the senior author of that study and president of the Society of Gynecologic Oncology.

“The big issue is that it's the worried well who want to be tested and who don't need to be tested,” Dr. Goff said. “It's about understanding who to reassure and who not to, and understanding what is a concerning family history and when there is no indication to send someone for genetic counseling.”

There are several screening tools designed to help primary care doctors identify patients who could benefit from genetic counseling, though none is clearly superior, according to the preventive services task force said. Experts said doctors should quiz patients about their family history of breast and ovarian cancer, especially cases that were diagnosed before age 50.

It should come as no surprise that the medical system is feeling the Jolie impact already, Dr. Lerner said. “When celebrities go public, it tends to have quite a major effect on people, particularly those who are at risk for that disease as well as with the general public. Even though a number of other celebrities have had this surgery done, the reaction was nowhere near as dramatic as it was in this case. The more of an A-lister you are in Hollywood, the more attention you're going to get.”

Earlier research confirms Dr. Lerner's view on the medical impact of celebrity. For example, nearly three-quarters of women 40 and older told researchers that they had seen or heard a celebrity tout the importance of screening mammography, said a study in the May 4, 2005, issue of the Journal of the National Cancer Institute. More than six in 10 men age 50 or older said they heard celebrities discuss prostate-specific antigen screening, and 52% had seen stars talk about sigmoidoscopy or colonoscopy.

“People are obsessed with celebrities and celebrity culture,” Dr. Lerner said. “If they're interested in where celebrities go to eat and what they wear, it really follows that they would be interested in their medical situation. People assume that celebrities know what they're doing medically because they're wealthy, have good connections and probably have access to the best doctors and best medical care.”

Despite fears of inappropriate genetic testing, the statistics for women who do have a hereditary risk for breast and ovarian cancers are dire. Women with the BRCA gene mutations are at least five times likelier to develop breast cancer during their lifetimes than women at average risk. They are nearly 30 times likelier to develop ovarian cancer, according to the National Cancer Institute.

The patented genetic testing for these mutations is pricey, ranging up to $3,000. Under federal guidelines released in March, genetic counseling and testing — if deemed appropriate — must be covered as a preventive service with no cost-sharing under the Affordable Care Act.

The testing is available only through Myriad Genetics, whose patents on the two genes are being challenged in a case before the U.S. Supreme Court. The American Medical Association has said that allowing patents of natural phenomena hinders medical innovation and clinical practice. Without patent protection, the price for the genetic testing might be as low as $200, according to news reports. The Supreme Court is expected to issue its ruling in June.

While the rate of BRCA1 and BRCA2 gene mutations is well below 1%, they cause between 5% and 10% of breast cancer cases and up to 14% of ovarian cancer cases. About 2% of women have high-risk family histories and may benefit from referral for genetic counseling and potential testing. Such elevated-risk cancer patterns include:

For women of Ashkenazi, or Eastern European, Jewish descent:

For women not of Ashkenazi Jewish descent:

Angelina Jolie's op-ed, “My Medical Choice,” in The New York Times, May 14 (link)

“Celebrity endorsements of cancer screening,” Journal of the National Cancer Institute, May 4, 2005 (link)