Patient safety: What can medicine learn from aviation?

■ From checklists to error-reporting, physicians and hospitals are implementing aviation safety techniques in health care -- and achieving mixed results.

Two minutes after taking off from New York City's LaGuardia Airport on a frigid January afternoon in 2009, US Airways Flight 1549 was struck by a flock of geese, instantly disabling the plane's engines. Capt. Chesley B. "Sully" Sullenberger III radioed air traffic control, seeking an open runway to land the Airbus A320.

As Sullenberger looked for a place to put the plane down, first officer Jeffrey B. Skiles immediately consulted a checklist on how to restart the stalled engines. Skiles' action showed how ingrained the checklist is in the culture of aviation, where it has been in use for more than 70 years.

Sullenberger successfully ditched the plane in the Hudson River. Then, outstanding application of emergency protocols helped the flight crew successfully evacuate the plane, saving the lives of all 155 people on board -- another dramatic example of how aviation's approach to safety yielded results that winter day.

Long before Sullenberger's role in "the miracle on the Hudson" landed him on America's front pages, he had been advising health care organizations on how to apply aviation's safety lessons in medicine. His consulting group, Safety Reliability Methods Inc., is one of many firms offering aviation-based training to health care organizations eager to achieve the industry's safety record.

"The risk of accidental death in a jet aircraft from 1967 to 1976 was 1 in 2 million," Sullenberger noted in a speech in March to health IT professionals. "Today, it is 1 in 10 million. After 75 years, we in aviation have benefited from lessons learned at great cost -- literally bought in blood -- lessons we now offer up to the medical field for the taking."

For more than a decade, doctors and hospitals have sought to learn from their counterparts in aviation. Checklists, structured communication techniques, preoperative briefings, error reporting and simulator training are just a few of the aviation safety methods they have tried to implement in the world of medicine.

However, adapting aviation's techniques to health care has not been easy, patient safety experts say. Inherent differences between the two industries have made it a challenge to learn from aviation's safety experience.

There are many reasons to believe that aviation's lessons should apply well to medicine, experts say. Both are complex industries where people's lives are at stake, and where highly skilled and trained professionals must work together to achieve safe results.

But there are dissimilarities too, said Harry C. Sax, MD, professor of surgery at the Warren Alpert Medical School of Brown University in Rhode Island. He is an instrument-rated pilot who has conducted aviation-based teamwork training for health professionals.

"People aren't airplanes. Planes are machines and they tend to act the same way every time. Patients are not that way. There are emotions and they're more complex than airplanes," said Dr. Sax.

"When a patient dies, you might think they were just sick anyway," said Dr. Bagian, a former flight surgeon and astronaut with NASA. "Because of that, you're not sure if the problem is because you screwed up or due to idiosyncratic differences among patients."

Preventable deaths occur one by one and usually are news to only the families affected, said Dr. Bagian, who is now chief patient safety officer of the Veterans Health Administration.

"With airplane crashes, it's obvious when it happens," he said. "There's a smoking hole in the ground."

The disaster that served as a "wake-up call" to aviation, Sullenberger said, was when two 747s collided on the runway at the airport on the Spanish island of Tenerife in 1977, killing 583 people. Fog contributed to the crash, but so did miscommunication. The captain of one flight thought he had clearance for takeoff, and the black-box recording showed miscommunication with his first officer -- who was apparently too intimidated to correct him.

The tragedy prompted the aviation industry to address how pilots communicate in the cockpit, using "crew resource management" techniques that allow junior crew members to directly bring up potential problems with the captain and improve collaborative decision-making.

"Before crew resource management, captains could be gods or cowboys in determining how things ran in the cockpit," Sullenberger said. "The crew member who spoke to the captain about unsafe practices was placing his or her job on the line."

Dr. Sax has tried to bring that team communication concept to health care in a six-hour course called "Lessons From the Cockpit." In a December 2009 Archives of Surgery article, he published findings that showed an association between the training and improved use of a preoperative checklist and more safety incident reporting. During the six years the training was offered at Strong Memorial Hospital in Rochester, N.Y., checklist use jumped from 75% in 2002 to 100% in 2007.

Error reporting increased from 709 each quarter in 2002 to 1,481 per quarter in 2008. Reports about unsafe hospital conditions increased 27%. Surveys of doctors and other health professionals who took the training found they felt more comfortable raising objections about care with their colleagues, the study said. But similar courses offered in other organizations often have failed to yield results, patient safety experts said.

"Many, many hospitals have hired pilots to do team training and crew resource management," said Peter J. Pronovost, MD, PhD, director of the Quality and Safety Research Group at Johns Hopkins Hospital in Maryland. "We closed the ORs, did these 'rah-rah' sessions and nothing changed. What worked for aviation teamwork is not necessarily going to work for health care teamwork."

Teamwork training's record of improving care is spotty so far, said Eric J. Thomas, MD, MPH, professor of medicine at the University of Texas Medical School at Houston. The training usually is too "generic," he said. "They teach very important skills but don't apply them to a particular process of care."

Dr. Thomas and his colleagues are taking a different approach. They offered interns simulation training in neonatal resuscitation combined with a two-hour team communication course specific to that kind of care. Compared with interns who received only the simulation training, the teamwork-trained interns completed resuscitation an average 2.6 minutes faster, according to a study in the March Pediatrics.

Perhaps the signal achievement so far in translating an aviation safety technique into medicine is the checklist.

First, a Dec. 28, 2006, New England Journal of Medicine study authored by Dr. Pronovost found that more than 100 Michigan hospital intensive care units reduced bloodstream infection rates by 66% after implementing a checklist of evidence-based infection-control measures. Then, a World Health Organization surgical safety checklist initiative showed great success, cutting complications by 36% and mortality in half, according to a Jan. 29, 2009, NEJM study.

Thousands of hospitals have launched initiatives to integrate the infection prevention and surgical safety checklists. Efforts are under way to develop effective checklists in other areas.

"The checklist is a culture-changing, as well as a procedure-implementing, maneuver," said Bob Wachter, MD, chief of medical service at the University of California, San Francisco, Medical Center and editor of AHRQ WebM&M, an online safety journal. "When done well, it can change the safety of care. I do think it's an epiphany for us in medicine."

The concept of reporting errors, close calls and unsafe conditions has not translated as well to health care, Dr. Wachter said. The idea, implemented in nearly all hospitals, is modeled on the Aviation Safety Reporting System, operated by NASA. The system allows pilots and others to report near misses or other problems in a nonpunitive system.

However, many reporting systems in health care fail to replicate the aviation industry's no-blame model. Less than a third of hospital reporting systems let doctors, nurses and others recount mistakes anonymously and promise privacy for those who identify themselves, according to a survey of risk managers at 1,652 U.S. hospitals reported in the December 2008 Quality & Safety in Health Care.

Some experts say it is time for medicine to get beyond looking to aviation for inspiration.

"I can't tell you how tired I am of going to patient safety conferences and hearing great aviation analogies, but I don't hear as many examples of, 'Here is how I improved health care,' " Dr. Pronovost said.

Many aviation safety ideas, from simulation training to standardized working environments, have potential to help patients, he said. But doctors and hospitals must not slavishly copy aviation.

"A mistake health care made is to try to take lock, stock and barrel what's been done in aviation and plunk it down in medicine," Dr. Pronovost said. "Health care has to find its own way." 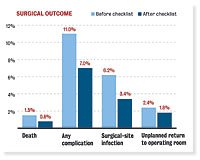 The World Health Organization's Safe Surgery Saves Lives program calls for a 19-item checklist that includes confirming the patient's identity and discussing anticipated problems. Eight hospitals around the world implemented the checklist, cutting mortality in half and reducing complications by 36%:

Aviation-based teamwork training courses have become increasingly popular, though demonstrating their effectiveness has been difficult. From 2003 to 2006, physicians, nurses and others at Strong Memorial Hospital in Rochester, N.Y., took a six-hour course, "Lessons From the Cockpit." Hundreds of the participants were surveyed before and after the training to gauge how comfortable they felt in taking safety actions, rating their feelings on a 1-5 scale.

Here are a few of the techniques used in aviation and how patient safety experts say physicians and hospitals are trying to translate them into the health care arena:

Checklists Brief lists of evidence-based protocols designed to make it easier for physicians and other health professionals to rigorously follow safety steps every time.

Teamwork training Adapted from aviation's "crew resource management," this technique focuses on improving communication among physicians, nurses and others to spot mistakes before they happen and be aware of the medical situation as it develops.

Briefings, debriefings and timeouts Whether used when handing off patients in the hospital or before and after surgery, these techniques are aimed at putting all members of the care team on the same page with regard to the medical situation and what is expected. These approaches can be integrated into a checklist.

Incident reporting Systems that allow physicians, nurses and others to anonymously report adverse events, near mistakes and unsafe conditions to hospital officials and regulatory authorities.

Standardization Every 747 has exactly the same instrument panel, lessening the likelihood that pilots will make preventable mistakes. Many hospitals are attempting to standardize the layout of areas such as nursing stations, patient rooms and operating room theaters.